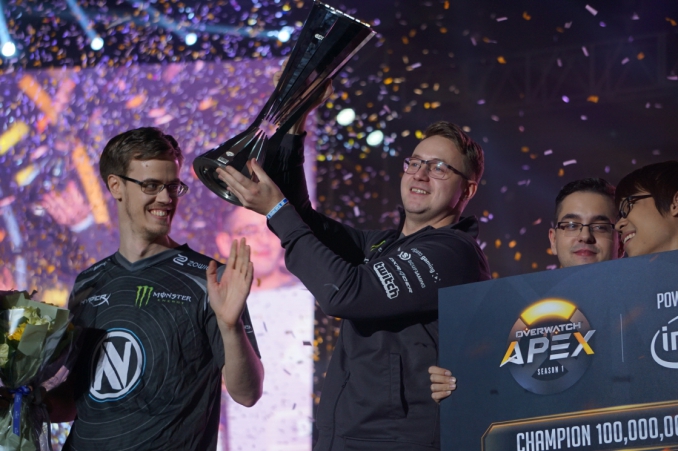 Former Team EnVyUs tank and Team Liquid head coach Dennis "INTERNETHULK" Hawelka has died at the age of 30. He was set to become the head coach of Team Liquid's League of Legends team in 2018. No details are yet available as to the cause of death.

INTERNETHULK was a prominent figure at Overwatch's highest level since the game was in beta. He was often credited with being the driving force behind putting together the highly successful IDDQD roster that later became Team EnVyUs shortly before the game's release.

When EnVy DPS Talespin left the team shortly before the playoffs of APEX Season 1, INTERNETHULK brought flex player Mickie onto the team, a decision that ultimately helped propel EnVy to their first LAN victory. The squad would later go on to win another at MLG Vegas.

When INTERNETHULK's contract with EnVyUs expired after APEX Season 2, he chose to venture into the world of coaching. He initially trialed with Laser Kittenz, but a few days later chose to pickup an offer to trial as Rogue's coach at APEX Season 3.

After he returned from APEX, he accepted an offer to become Liquid's head coach. Under his coaching, Liquid would go on to finish 2nd in Contenders Season Zero.

In the short time since his death, the community has been working on ways to honor INTERNETHULK's memory. Some have proposed naming an Overwatch League award after him. An event to honor his memory is currently in the works.

If you would like to send a letter of support to Dennis’ family during this time, please use the following address:

Gonna copy/paste what I put in the other thread;

I've posted before how much I respected him as a player and thought he shouldn't be forgotten about. It was such a weird feeling to see someone I respected in esports die, especially considering I've thought about it a lot before. Seeing people from other parts of Liquid and other games in general chime in as well was super awesome.

I guess I'll be one of the few people to say it already, does anyone else really want to know what happened? I'm just hoping it wasn't anything tragic that could have been prevented, like an accident, or something worse.

RIP HULK, really really hope to see him honored in the future of Overwatch somehow.

The world could always use more heroes... He was one of them.

My deepest condolences to his friends and family.
Rest in Peace INTERNETHULK you will be missed

His energy was irrepressible. He was a PMA inspiration.

RIP Dennis. He contributed so much to the Overwatch esports scene, it truly would not have been the same without him. Gone but never forgotten

Corny, I know, but it fits.

Rest in peace big guy. One of the absolute best for all that he's done for the game, including bringing us the monster of a team that is EnvyUs.

Left us way too soon, hopefully his friends and family are getting all the support they need.

We owe this man a lot, he has done so much for the community. Gone so soon, but will not be forgotten. RIP Hulk.

Just seeing all of the tweets by pros/former pros/people that have played with him saying how he's impacted their careers in overwatch really shows the impact that he's had on a game that's still relatively young.

RIP INTERNETHULK. You will be missed very dearly.

I live here in Charlotte, the home (or former home) of team envyus and used to check the team envyus website almost daily to buy an internethulk jersey. If anyone knows how to make this possible please pass word along.

He helped Envyus become the best team in the world last year, and his legacy will live on.

Rest in peace Dennis, and thank you for what you've done for the OW community.

Definitely lost a cornerstone of our community, and we should continue to play, and show as much passion as he did to honour him.

I couldn't believe it when I saw the picture on the website. What a news to wake up to :(

Biggest condolences to friends and family, this is a sad day. Rest in peace Hulk.

One of the Greats. He left his mark in a deep way on the scene.

Hulk is an absolute legend. His entire legacy in OW esports speaks for itself. I miss him dearly as a pillar of this community.

Also, this needs to come out.

STOP FUCKING ASKING WHAT HAPPENED TO HIM! So many people just wanting to know details of his passing, it blows my mind. Have some fucking respect for fuck's sake.

Calm the fk down. You think people dont have respect over him when it is just a rational thing for anyone to question.

It’s not rational whatsofuckingever to start inquiring about how someone died. This ain’t high school gossip, it’s real life, grow up. Besides, what’s it gonna do to know how he passed ? Absolutely nothing.

Have i done that? I told you stop whinging.

No, this could affect lots of things.
If Kurt cobain died from a shootout with the cops rather than suicide that would change your perception of him.
But if InternetHulk died from something like an OD- which is a fairly common way for someone of his age to die, then this would raise a whole other issue.

And it shows no disrespect, the family probably does as well. Very few people die at the age of 30. At least in first world countries with money

No, details will be made available if his family wishes so. Imagine scrolling through threads/tweets of people paying respects and then there's that person who just asks how'd he die/what happened to him ?

Not saying it comes from a bad place, it's just not mannered, moreso in public. There's a difference between thinking something and actually saying it.
And OD is not by any stretch of the mind a common way for a 30 year old to die, but that's another topic.

He left a great mark on the Overwatch game and community alike, people should leave it at that.

Rest in peace Dennis. We will miss you :(

At first I was impressed that HULK was able to compete with the young guns of Overwatch in the early days competitive. Later I was increasingly impressed that he was able to play and IGL the world's undisputed best team for such a long stretch of time. Now I can only mourn the loss of such an inspiring player and leader.

Huge tragedy, Hulk will be missed all around the globe :(

I don't know him personally , but seing every message about him show me how great he was.

Rest in peace Dennis you will be missed. I still can't believe he's really gone.

shocking news I met this awesome and down to earth person at gamescom several times.
rest in peace and my condolence for friends & family
nur die besten sterben jung

RIP, this guy was amazing

He and the EnVyUs boys got me into watching the pro scene back in September last year. I still can't believe it.
Rest in Peace, Dennis. You went way too soon :(

RIP to one of the godfathers of OW.

I can't even believe that just happened...rest in peace big guy,Overwatch and his community owes you a lot...

RIP INTERNETHULK, one of the reasons I started watching pro overwatch, gone too soon

I think the Hawelka cup sounds amazing. They should definitely use his name on the OWL trophy

Agreed. Should be an OWL trophy or something.

It could be for the panel's MVP as opposed to the tmobile one.

This is indeed a sad news, rest in peace mate!

His impact and influence on Overwatch exports went way beyond just a player, and he will be missed. RIP

He touched so many people's lives and without him, a lot of the players we know wouldn't be there today. He was one of the founding pillars of Overwatch esports, in a way. I was really saddened when I learned he passed away so early, but he will definitely leave an amazing legacy behind him.

as i know this guy, he would not want us to be sad about this.
he was such a down to earth guy and its sad to see such sad news after a day of work :(
r.i.p and my condolences to friends and family

Exactly. It's only natural for the community to feel sad, but everyone outpouring his great qualities makes me really happy that someone like him was around. Dennis was truly a one-of-a-kind gentleman.

Hard to think of any other individual with a bigger impact on the overwatch esports community. Never heard a negative word about him. He will be sorely missed.

Used to hang around his stream and he's the reason I became a Winston main for a while, just that kind of guy that makes you smile no matter what. Wish I could have met him - rest in peace, legend.

It's clear from the last 24 hours that you meant so much to so many. Thank you for everything.

I remember when i first saw his interviews when he was with envy and i became a fan instantly. he was just such a genuinely good dude.

Dennis did so much for the OW scene and a more positive perception of esports in germany. Rest in peace.