The avalanche of Overwatch League reveals has continued, with the league's New York franchise unveiling its roster and branding. The team will compete as the New York Excelsior, NYXL for short, a reference to the state's motto which means 'ever upward'. 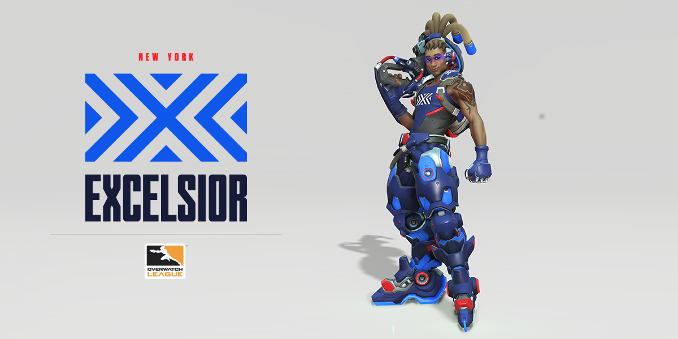 The Excelsior had this to say about their name and branding:

"Excelsior” represents the extreme scale and boundless ambition of the city, and the passionate drive of a team committed to reaching the top and never letting up. Excelsior represents the heroic optimism and positivity of Overwatch, a game that empowers everyone to become a hero. Within Excelsior is the abbreviation XL, which encapsulates New York at its most powerful: the city of more people, more fans, more creativity, more drive, more passion, and more soul.

The core of the all-Korean team is made up of the Luxury Watch Blue roster that competed in three seasons of APEX. Joining this core is ArK, formerly a support player for Luxury Watch Red, and Libero, who departed from Meta Athena this month after the completion of APEX Season 4. Notably absent is former LuxuryWatch Blue and South Korean World Cup player Flow3r. It remains unknown if the star DPS talent will join the franchise when he meets the league's age requirement in May next year.

LuxuryWatch coaches WizardHyeong, Pavane have joined the franchise as the team's coaches, whilst former LuxuryWatch analyst, Andrew Kim, has signed with the Excelsior as an Assistant Coach. Former Blizzard employee, Bearhands, will continue his role as Director of Player Personnel after joining the franchise in June this year.

Earlier this year, LuxuryWatch Blue withdrew from APEX Season 4 only three weeks into the tournament, citing upcoming Overwatch League commitments. Despite being considered one of the best rosters in Overwatch and claiming a championship win at IEM GyeongGi in 2016, LW Blue have underachieved in APEX seasons; their best result was a bronze finish in APEX Season Two. With star DPS player Flow3r not joining the team in Overwatch League for now, it remains to be if the New York Excelsior can compete with the league's best.

The Overwatch League roster of the New York Excelsior is:

I likw the logo and the skin but not the name

what do you mean?

I'm not a fan of the logo, the color scheme is very similar to Dallas and the name is definitely the one I dislike the most out of the currently revealed ones yet.

I'll be looking forward to seeing what they do with the roster down the line and if they'll keep adding more Koreans from the ever growing pool of talent in APEX or if they'll restructure the team to be a mix of KR/NA/EU down the line.

why do these teams need so many coaches?

“Coach is better than no coach, so logically we need a billion coaches!”

Don't forget that they'll need much more support than a normal western squad would. I think success in OWL for them will be heavily dependent on how well they can adjust to not being in Korea and dealing with the displacement and homesickness etc.

I don't know what roles all of them will have but they will probably play a large one in that regards.

The family name is written first in Korean. So Kim is the family name, something like Smith. But it's still much more common than that.

tbh I love all of this. Excited to see this team perform.

No Flow3r? They won’t be able to compete with London.

But he turns 18 before playoffs

But that’s before playoffs in July

You have to turn it before 5th april

That’s a really dumb arbitrary number that’s even dumber than the age limit. Thanks for the information though!

Ten thousand Korean players and 1 NA coach.. you'd think they would just get a KR coach

Given his last name (Kim) I assume he's a Korean-American, regardless though, I think a mix of both is probably going to be needed to help them acclimate to their new environment.

A few articles have been made pointing out that the success of these Korean squads might hinge on how well they can adapt to being taken out of their Korean bubble.

Chances are the Korean coaches will all speak Korean, who will be the one communicating in English in that sense? these Korean squads absolutely need someone who can speak both Korean and English that will not only help inside of tournaments but more important outside of them.

Got to remember these Korean players probably know zero English, imagine walking about or doing every day things in America with zero English? that's why.

Libero and Saeby cant wait to see them together.

a logo that actually manages to be worse than the detroit pistons logo :puke:

whoaaaaa, the old pistons logo with the horse was sick and the new one is pretty dope...

The old one with the horse was one of my favorites! The current Pistons logo is just too plain for my liking, however.

so many teams with blue color schemes, that's a little boring

Hopefully they use helium and not hydrogen.

no fl0w3r no party :(
libero and pine also sick tho

I hated the logo until I saw the "NYXL" thumbnail on the main page. That's sick af.

Fl0w3r relies on his images of early days. He failed to prove himself in offline tournaments such as APEX for long. He showcased some outstanding performances in exhibition games or open scrims but SBB was the one who has always carried the team in real tournaments. I know Fl0w3r is a good player with flexibility in his hero pools but I guess he is one of the most overrated players so far. I believe Libero and Pine will be enough to make people forget about the absence of Fl0w3r in New York's roster.

So I'm the only one that actually likes the name and the logo. Maybe just being biased cuz I'm a New Yorker

I honestly don’t know how to pronounce the name, so I’ll probably just call them “Plus Ultra” since they seem to mean similar things.

You can click the little speaker button to hear it pronounced.

At first I didn't really like it but calling them NYXL or New York XL seems pretty good.

the Kim meta is here

They have had an absolute nightmare! What were they thinking with that name and look what they've done to poor little Lucio!

Good luck to em tho

in B4 nicknamed the X-Men

The real question being, will over.gg put a Korean flag or an US one when talking about the team just like Rogue? :thinking:

US based teams usually have US flags, regardless of where their players are from. See Rogue, FaZe and EnvyUs for examples.

don't tell sideshow that he doesn't follow our rules

Sideshow's a rebel, and also British, not that it has anything to do with it, I just like pointing it out.

Fuck the system, London Spitfires is a korean team, not US or UK.