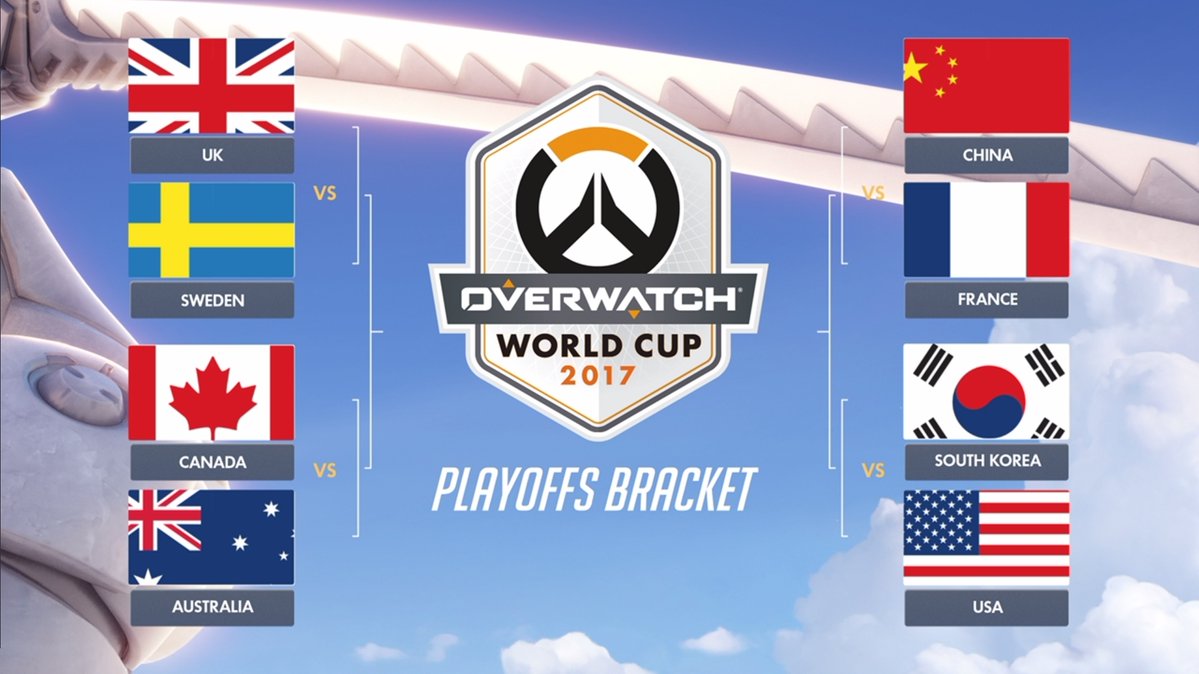 In a post-match show following EnVision eSports' upset victory over Immortals in Overwatch Contenders, USA-based caster Mr X drew the group stage matchups for one of the most hyped up tournaments of the entire year in the Overwatch World Cup. Using ping pong balls with nations initials painted on them, he drew them one by one from a machine that randomly assorted them using a fan.

As one would expect, every nation entered the draw crossing their fingers in hopes of avoiding South Korea, the nation heavily favored to win the entire tournament without dropping a single map. The picture became more and more clear with each ball drawn, as Mr X first slotted the UK into the first spot, and then drew China for the second on the other side of the bracket. The first round of draws finished with Canada slotting into the third spot on the UK's side, while South Korea rounded it out with the last spot.

In the second round, Mr X drew the talented-but-underwhelming Sweden to match up against the UK, while he picked the second team to exit Shanghai—France—to square up against China. Tension grew as the team that was to be drawn next would face Canada, while the final team would have to face the tournament favorites in their first match at BlizzCon.

In a sheer act of contempt, Mr X drew Australia to suit up against Canada, leaving his home country to face the daunting South Korea in their first match. For completion's sake, Mr X did draw the final ball to prove that the USA would indeed need to match up against South Korea, dashing the hopes of anybody hoping that the draw was some cruel mistake.

The playoffs for the Overwatch World Cup will take place at BlizzCon, which takes place on November 3-4.

I can feel the contempt for Mr. X emanating from my screen

Just to remember you Rogue lost to Envision because they have a very stricted hero pool, unable to change as the matches goes by. On the other hand, Korea used every hero but Symmetra on the Groups Phase.

So much for a good finals... South Korea/China VS Canada?

I believe in the UK Korea final, but could easily be Canada if the new mercy changes create a pharmercy meta.
UK and France could both be left behind if dive dies before Blizzcon

Providing the meta doesn't drastically change before Blizzcon, my prediction for potential winners before the draw would have been:

After the draw I'd have:

That potential semi between South Korea and China is mouthwatering though. Blizzcon can't come soon enough.

So hilariously funny watching this live with the casters/production people. It was destiny.

AU to the finals, gg ez

Personally I still think this is still a flawed system, if they wanted the best finals then seed it like every sport, the highest country SR faces the lowest rd 1, 2v7, 3v6, 4v5

As a Canadian even I'm disappointed that the B side of the bracket arguably looks so much more stacked than the A side. I hope we get to see epic matches on the way to the finals either way.

I think the possible issue with that is that seeds had nothing to do with how strong the countries' actual teams may have been since they were just based on ladder rankings.

EZ for the U.K. boys straight to the finals

given the small number of teams, they should've adopted double elimination like the TIs. That way the best team would win (not as easily), and the second best team could place second (instead of being eliminated early). We will be able to see the best finals.

Potential Ashes semi-final... Oh I need that in my life.

Too bad it can't be the final really

The Queen will be supporting us for this one I'm afraid.

They change the format to a random draw after USA were originally supposed to get Korea... and they still get paired. Priceless.

And USA was matched with Korea last year too LMAO.

No escape from Korean destruction

And now everybody on reddit is asking for a double elimination bracket. Come one, don't they see this is getting awkward at this point?

To bad were gonna have to knock out the poms on our way to the grand final...

worst draw i have ever seen, China Korea France and USA are like the 4 best and in the same bracket wtf

I will most definitely be rooting for the UK team after the US gets annihilated.

Love how everyone thinks Korea's side is much better. Sure China/Korea are there, but if there's anything I've learned from the first 2 weeks of Contenders and APEX is that even the better teams can lose. The meta will presumably be different come blizzcon as well, so it's just silly basing all these assumptions on who the better teams are on the current meta

Of course, but you can't base your analysis on what we haven't seen yet, going off quantifiable results is the only actual way of trying to predict apparent strength.

As you say, it remains to be seen what the effect of the November meta will have on teams but that's not something you can take into account right now with any kind of accuracy.

There's nothing wrong with being incorrect about something 2-3 months away using the data you have available to you now, imo.

I can understand the point of perhaps over hyping the Chinese team, as nobody is really sure just how good they are, but you can't do the same with Korea. The meta doesn't matter to them, they're just so much better than everyone else at adapting to different situations as everyone on that team has ginormous hero pools that they can all play incredibly well. It'll take something special for a team to beat them, which perhaps the Chinese will have with the uncertainty around them.

I want to too but i'm not sure if China is actually good enough.

They're not called France.They're called Sprite.All in all, some of France's players have made a bad impression on Chinese audiences in China.They are too arrogant.

US VS UK GRAND FINALS. U META TOO STRONG.

Yea, so many good potential matchups here, but Blizz choosing single elim bracket just shows that I can count their IQ with just my two hands.

This is not the best, but it is better than the worst