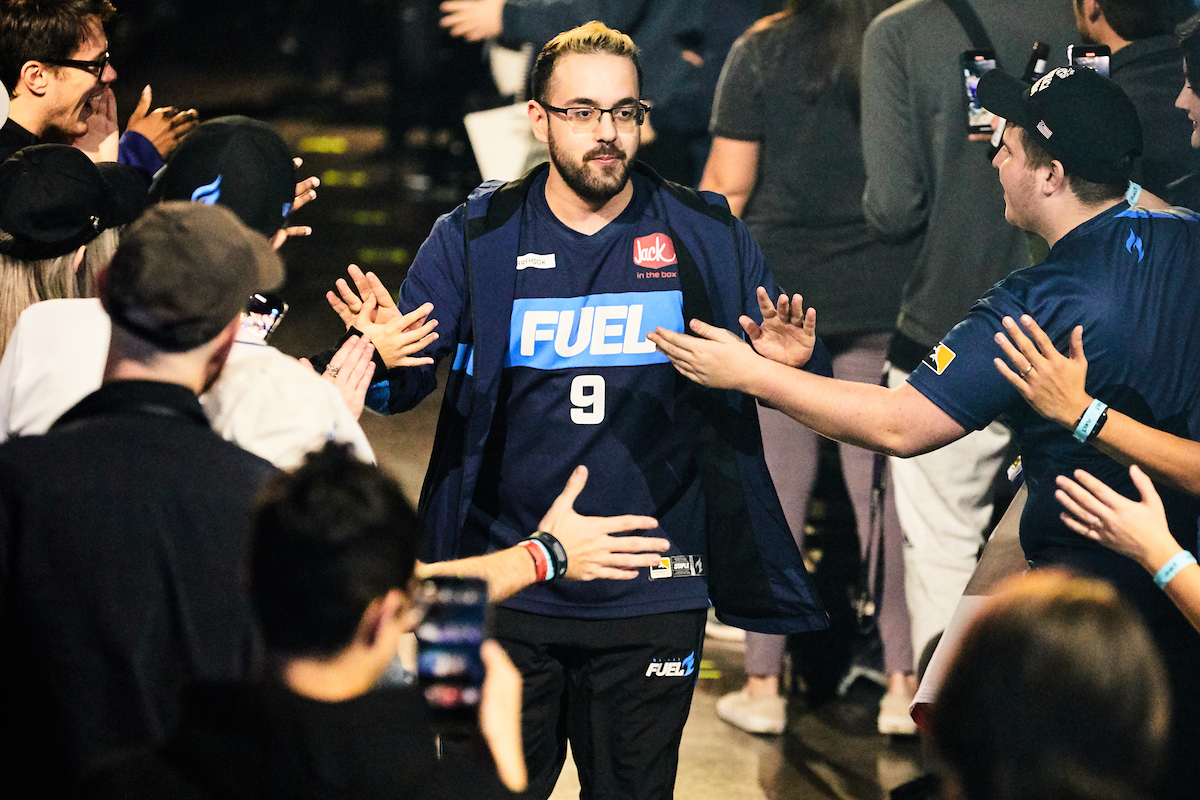 HarryHook has been released by the Fuel due to player misconduct. Image credit: Tyler Demogenes for Blizzard Entertainment.

HarryHook was with the Fuel since the inaugural season of the Overwatch League in 2018, and further extended back with co-owners Envy Gaming since 2016. He was also the last player from the old Envy roster to remain on the Fuel.

His release follows screenshots being made public of misogynistic comments he made in Discord conversations.

He is also the fourth member of the organization to part ways with the team within a week; DPS player Decay and head coach Aero were released by the team, and assistant coach Tikatee parted ways.

The Fuel are down to 10 players on the roster, and are set to compete in the Countdown Cup this weekend, with their first match against the Washington Justice.

this man's tweets are insane

He's one of these delusional people who think free speech exists.

Free speech exists but only to a certain extent. In his contract I’m sure there are personal conduct codes he agreed to follow when he signed his contract and he broke rules of the contract. It isn’t say whatever the hell you want it’s there so society can advance and new ideas can be formed.

People seem to think 'free speech' means 'I can be an asshole with no consequences'. What it really means is you can criticise without fear of undue repercussion. For example, saying you disagree with a political decision without worrying you'll be thrown in jail. Free speech is not calling women whores because you don't like them.

Well there's this one man who believes in "free speech" and look at how far he got in America and look how far he (hopefully) will drop in a few months.... there's something orange over here....

and whores, and bitches.
yeah like what's the problem with that?! cmon harry just let them be.
respect all females

Why they never share full conversation, but only parts of it?

posted about a year ago
reply • link
#6
thatagedwell
7
Frags
+
–

I think the person sharing also said some suspect stuff, so they only share stuff that makes them look good. Even something like "respect women you retard" they might try to occlude since it sorta incriminating. Bad example but that is my theory.

I spoke to her on twitter briefly, she said she spoke to Harry for 2 years and he was a "friend" so I'm guessing his views either got worse or she got fed up, I doubt she had the same views on women and only uploaded the worst screenshots she had rather than 2 years worth.

I personally don't see what the problem is, we can't expect everyone in the world to love men and women the same, some women hate men and some men hate women and I'm sure nastier shit gets said about them both.

But welcome to 2020 where anything remotely negative will most likely fuck your life up, walk on egg shells.

Well I'm with you there that I don't really see the problem based on those 3 screenshots as they are offering basically zero information.

It's silly though that most of the stuff Harryhook said... are technically true, but some people refuse to believe in facts that there's always some women or men who are, what they are. Just look at this whole Covid-19 situation... if everyone would just take it seriously and sit at home for few weeks or a month... it would get better, but how many of those people actually just went outside to "have some fun while you still can"?

Technically true depends on your perspective and what you mean. Some women being "whores", as in them being sex workers, is true. However, here it's used to demean them based on their sexual activity. Men and women being themselves is uh...normal, but what does that have to do with trying to use sexual one's habits as an insult?

Do you know what else is technically true? Black men get incarceration at a much higher rate than white men. Facts. Does it tell the entire story? No. Nuance and context matter but you're not applying that to this situation and how we treat women in general.

I know learning and growing is hard, but damn people, it ain't that hard.

If wording is SOME 'insert group of people' are 'insert what they are' that's just like saying you won't find even one women or men from 3,4 billion each gender to be fitting into that category. As far as you can see that conversation is like Harryhook wanted one-night-stands, which he claims to have made clear to those women, but those women ended up wanting more? What's so wrong with that? Sure, if he calls women constantly with whores/sluts/meat/bitches etc. that's different conversation, but do you really get that information from those screenshots? If woman goes to bar with zero money and expects someone to buy her drinks, what does that make her to be? You are welcome to answer and I don't think it's anything positive.

Does it justify calling other people with what ever names? Of course not, but if you look at how that woman asks specifically her questions like that it's no wonder you get answer from like that. Like calling out "but you used these words before etc.". It's just same than I could say something similar here and call out random name who might have said it, but what does that really proof? You are acting like that, when you see 3 random screenshots of random conversation of 2 random person you have never heard or known you should jump to judge them based on that even, if it includes some nasty words from both sides?

He's not wrong about Americans either, just look at what kind of person they voted as their President. Does it make it wrong, when he uses bad words? Not really, but does it make him look any better, when he uses certain words? Choose yourself, but it almost looks like you are calling me a sexist or racist or something just based on your respond. If that's what you are trying to achieve I don't really know, what does that make you.

Honestly there's too much to unpack and I don't think I'd be able to effectively communicate my point to you since you think I'm calling you sexist from what I previously wrote.

You also seem entirely uninterested in broadening your own perspective so there's isn't much more to add to this. Looking at the comment and examples you just gave reinforces that impression.

I assume we can at least partially chalk it up to cultural differences, but then again, learning and personal growth are always an option.

I know learning and growing is hard, but damn people, it ain't that hard.

That's just calling me out in your first respond so choose your wording better next time then.

The wording I used says exactly what I want it to say. The comment itself obviously doesn't take aim at you specifically, but if you feel otherwise then that's on you.

A bit of introspection will go a long way here but a lack of knowledge and/or understanding doesn't inherently make you sexist so I'm not sure what you're on about.

Maybe you don't see, what you did there, but what ever.

You ended up also proving my original point with your comments though. So thanks for that.

It's easy to say X group is Y and call it "having a different opinion". Maybe we don't want to be shitting on people for literally being. Maybe we don't want to perpetuate shit's that's been going on for centuries. Your argument that worst shit being said is irrelevant. It's just not that hard to not be a dick. It's not that hard to try and understand other people's perspectives.

The other side of this argument is that people need to be given the space to fuck up if we want learning, understanding and growth to happen. From the few details given, Harry didn't seem to be interested in any of that if his views of some women was that they were "whores" and "meat".

Welcome to being a balanced human being.

Easy way to get rid of a contract, I guess.

I was thinking the same thing! Everyone has been saying “Dallas has to shed their dead weight like harryhook” but I didn’t think stuff like this was gonna be the way the did it lol

He made it real fucking easy for them.