With today's announcement, the San Francisco Shock are the third of the Overwatch League's inaugural twelve teams to announce their branding. The Shanghai Dragons and the Dallas Fuel were the other two teams that unveiled their branding over the past few weeks.

When rumors began surfacing about the San Francisco Shock, images of electricity and lightning bolts, such as the logo of the Los Angeles Chargers, popped into the heads of those speculating. However, a press release announcing the team's branding suggested that the name refers to a different kind of shock.

The SF Shock chose its name and logo to represent the seismic energy and activity of the region. The seismograph logo is presented in gold, honoring San Francisco's historic gold rush heritage. The seismograph waveform presents itself as a silhouette of the Bay Bridge, an iconic structure connecting the City to the East Bay.

Keeping the theme of earthquakes in mind, the San Francisco Shock have already caused exciting rumblings a few weeks ago by being the first of the North American franchises to announce their roster. It is believed that the team has yet to reveal another player or two signed into the lineup. 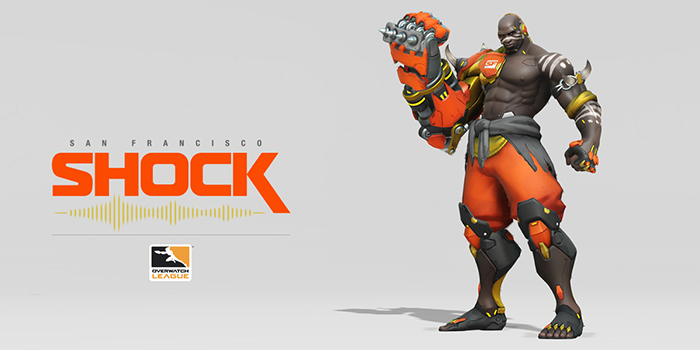 Rumor also has it that most, if not all, of the teams have finalized or are close to their finalized branding. At the current rate of announcements so far at about one every one or two weeks, there will likely be a few more teams announcing their branding before BlizzCon on the first weekend of November.

easiest headline of my life

I really like the logo i have to admit...

The logo reminds me of radioshack...I just can't bring myself to like it. So I have no choice, once again I must....50 DKP MINUS!!!

best one so far

I love that skin but I suck at doomfist

Scrubasaurus, what will he come up with next?

Team name's got me shook.

Have you read why they'd name it like that? For me it's pretty interesting.

the name is a haHAA

We appreciate puns in this neighborhood

why even bother doing OWL, NA will be nuked to the ground soon anyway.

I knew I forgot someone in my memer squad...

I'm assuming the lines below the "Shock" are representing the readings from a seismic monitor? It's kind of hard to see to be honest, they may want to change the color of it. #BoomShaqALaka