The first stage of OGN APEX Season 4 reached its conclusion on Tuesday, with a single match between Lunatic-Hai and Meta Athena capping off the group stage. Before the playoffs were ever in sight, the four-group round robin had brought week after week of stories. Iron gauntlets frightening world champions, war strategists, monsters, and watchmen falling from grace; redeemers and runaways climbing back up, and challengers taking their own place.

Advancing to the first playoff stage is a who’s who of veterans and newcomers:

Eight players from their respective teams sat on center stage, the camera dramatically panning across. Most of them look calm and collected, but two stand out. Bdosin from Kongdoo Panthera lays back on his chair, eyes darting around as he plots a way to get Panthera their own APEX title. Ecstatically waiting is ArK, his spirits high after LuxuryWatch Red successfully found momentum in their first season of APEX. 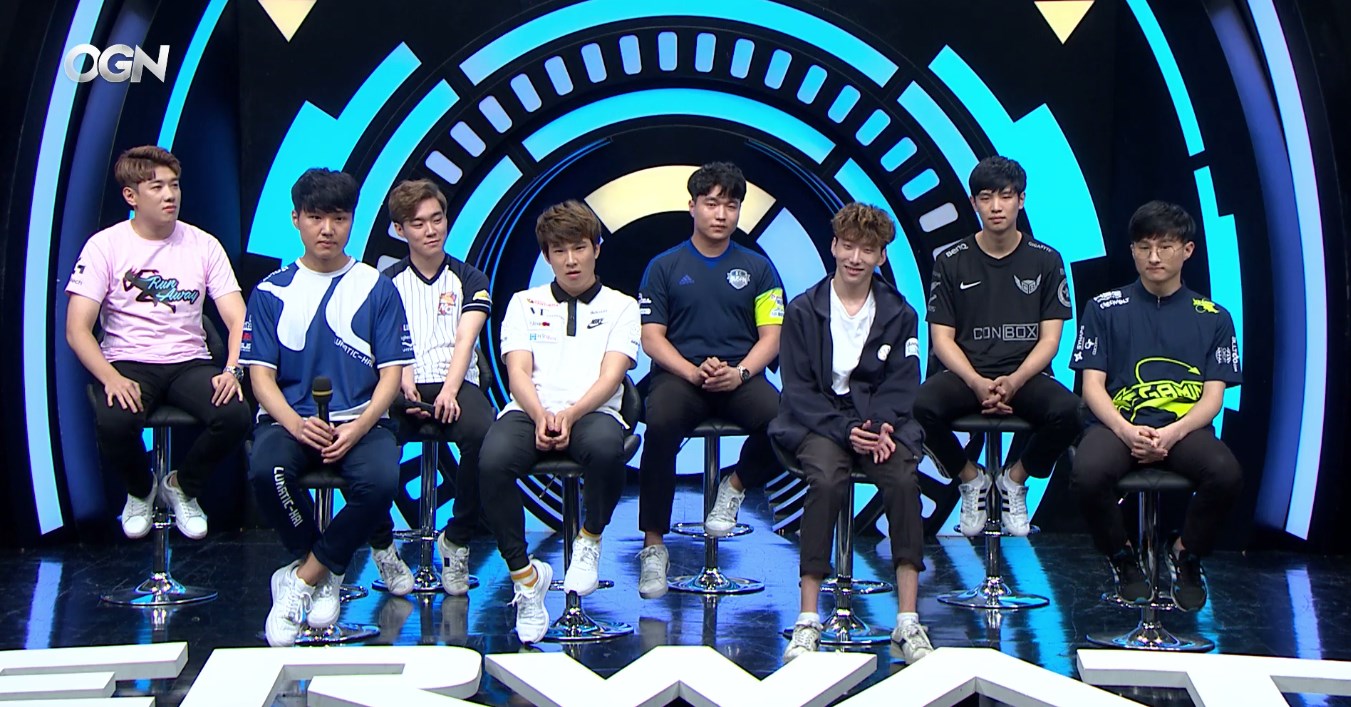 The camera then focuses on the group draw board; two empty groups that will fill up and present the first playoff stage. The groups play in the GSL format, a double-elimination style bracket that will ultimately determine the four that move on to the final stage. The upcoming draw decides who gets to pick their group and initial opponent in what order.

After a few minutes of banter, the draw begins. Representatives from the first seeded teams walk over to a capsule-filled bowl, where the order of the draw will be determined, with ArK rubbing his hands as he and the group gaze into the bowl. GILY from X6-Gaming initially picks up a ball, but then quickly puts it back after having second thoughts.

The group eventually settles the pick order of the capsules in a game of rock, paper, scissors, with Bdosin winning the four way game. He picks first, followed by a shy ArK, Lunatic-Hai's zunba, and finally GILY. ArK attempts to bargain a trade, but gets declined by the others. zunba holds onto his, remembering the last season where tobi refused to trade and ended up 4th in the group picks, and decides to stick with his guts. The rest of the group follows suit, not wanting to give away the potential 1st pick. 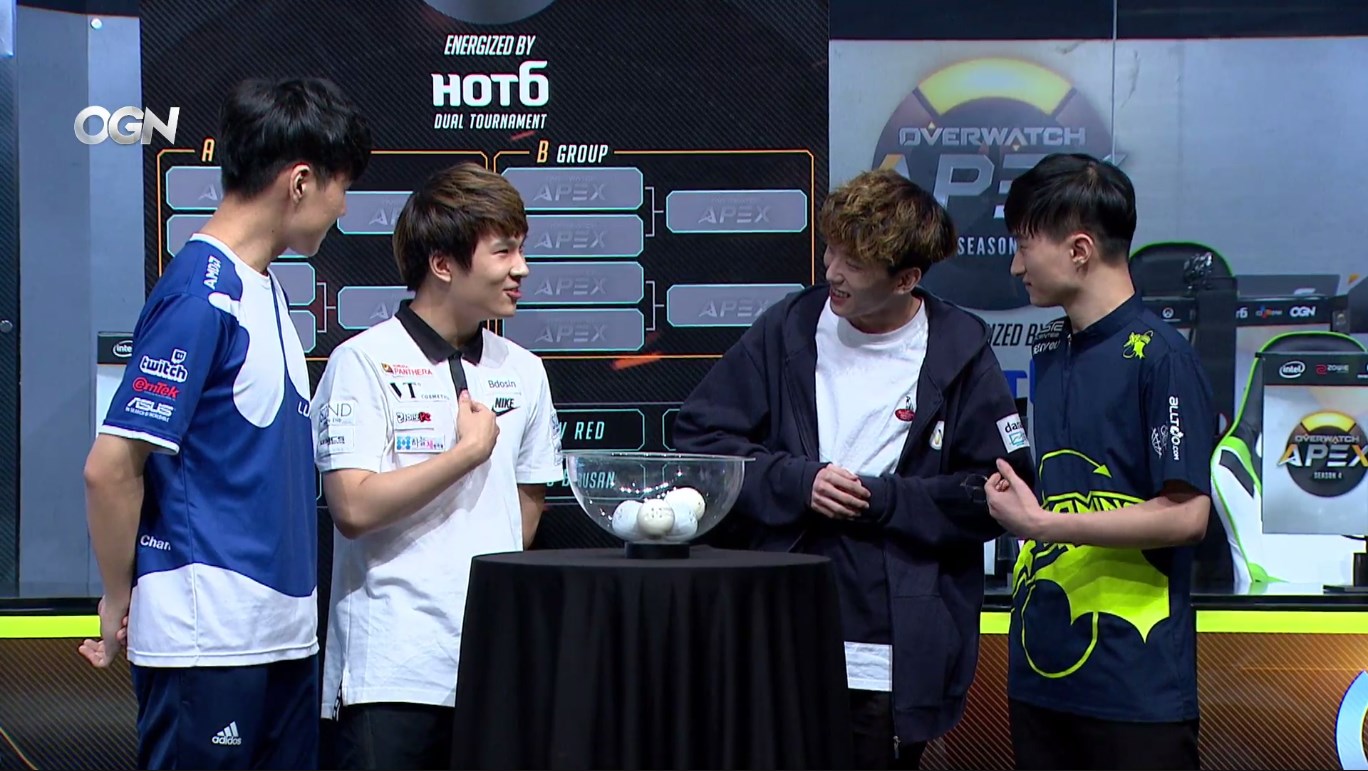 zunba is the first to open his capsule, and as he looks away from the piece of paper, it’s revealed to be a 3. Bdosin opens his, and in a stroke of luck, it’s a 1. ArK follows suit, and breathes a massive sigh of relief as he gets a 2. Unfortunately for GILY, that means he's the bearer of 4.

Bdosin is up first in the group draw, placing Panthera in Group A. He teases the entire audience as he chooses his opponent, hovering his hand over NC Foxes, and almost picking up RunAway. With a smile of his own, he settles for CONBOX, the team that the majority of others gunned for as their preferred matchup.

ArK goes up next, and in a ballsy move, he elects to have LW Red in the same group as Panthera, drawing shock from the audience and casters. He follows up with a less risky matchup pick in the form of NC Foxes, setting up a Challengers matchup.

zunba steps up to the board, and with Group A full, he places the APEX Season 3 champions onto Group B. As he assess his choices, the option of RunAway becomes tempting - a rivalry heating in the crucible. But he ends up going for GC Busan. With only two teams left, GILY heads up and creates the final matchup between X6-Gaming and RunAway. 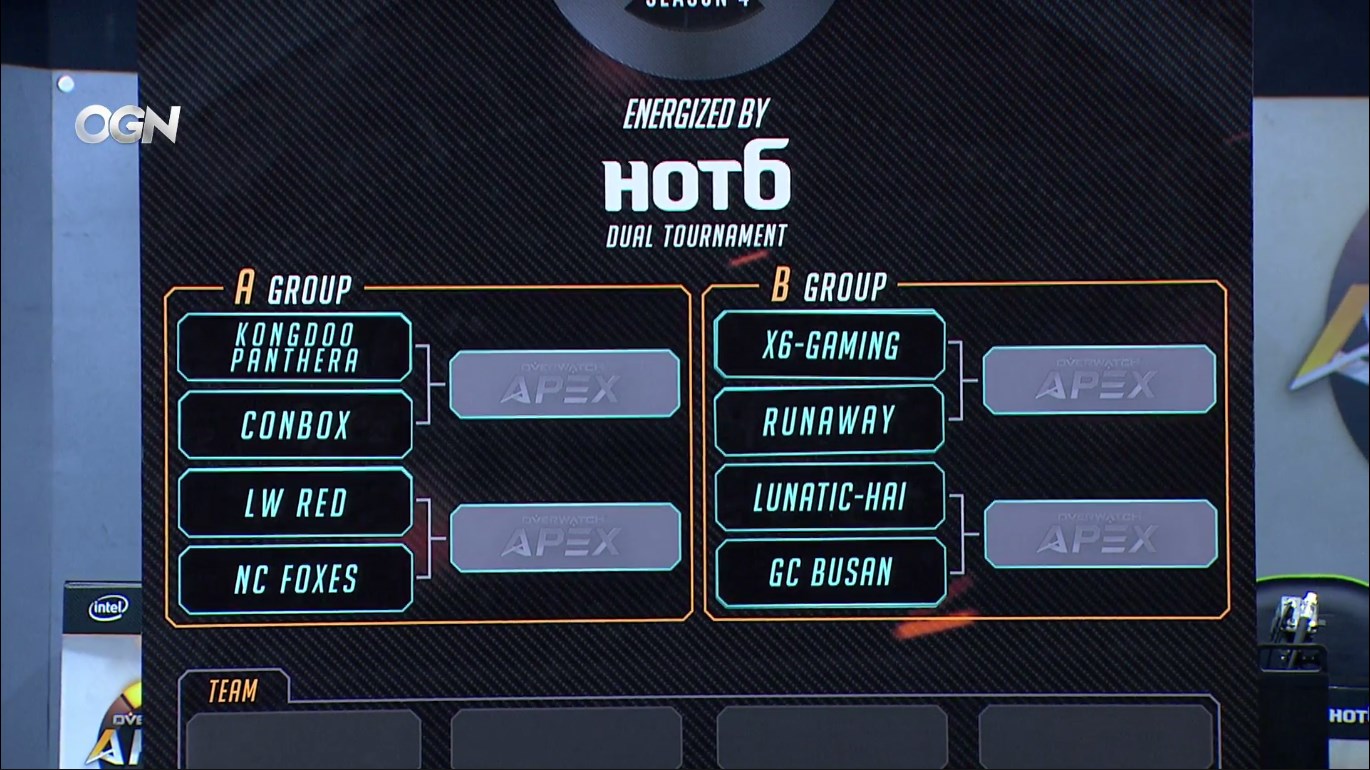 With the draw done, and an APEX finals waiting in the distance, the first playoff stage begins this Friday with Kongdoo Panthera vs. CONBOX. Be sure to keep an eye on the event page as the playoffs unfold!

Lunatic-Hai has a legacy to cement before they head to Los Angeles for the Overwatch League, while Kongdoo Panthera are feisty to get their revenge from the APEX Season 3 finals. The rest are just as hungry to dethrone the kings, including old rivals RunAway, and the sparks of the Challenger teams.

A special thank you to Frus for his help with the article.

I wanted to add a bit of a story element to the article, since the group draws are fun to watch and add their own storylines. :D

I'd say Lunatic Hai's bracket is a bit stronger, though nothing like it was in the past two seasons. The clear favourites to me are of course LH and KDP and i think they'll be joined by LWR and either X6 or Runaway.

Personally I hope Runaway make it so they get more exposure and support but I don't think they currently have what it takes to win it all.

The finals is looking like it will be LH vs KDP again and I'll be rooting for LH to go out with a bang and a third consecutive title!

"...LW Red in the same group as Panthera, drawing shock from the audience and casters..."

I don't get what's shocking, LH had 3rd pick so this way he made sure to avoid them, LWR had 2nd pick so he also ensured to have the two weakest teams in his bracket, making Panthera their only real threat, pretty much securing 2nd spot in the bracket.... it's brilliant and obvious.

got my money on GC busan to cause an upset against L-Hai .