Immortals' franchise to be the Los Angeles Valiant

The fourth of the Overwatch League's 12 inaugural teams has announced its branding. The Los Angeles franchise owned by the Immortals will carry on the tradition of a helmet-based logo and become the Los Angeles Valiant.

We are proud to present to you the @LAValiant!

According to the team's press release, Immortals sought a brand to reflect their core values and championship legacy of Los Angeles, something they believe "Valiant" achieves. "[Valiant is] signifying heroism and demonstrating courage, bravery, and determination," said Immortals CEO Noah Whinston. "That’s who we are and who we will always strive to be.” 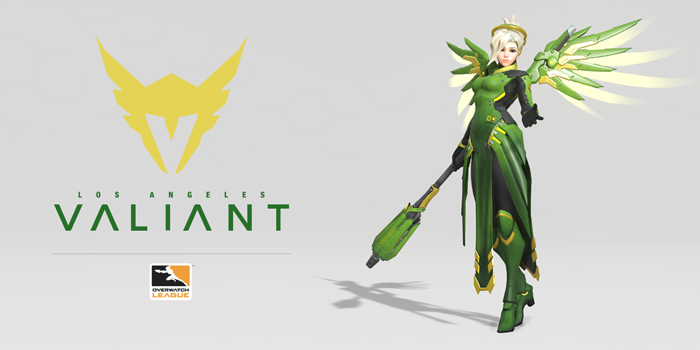 The Los Angeles Valiant will be one of two Los Angeles franchises in the initial season of OWL. The other is owned by the Kroenke family, owners of the Los Angeles Rams and a number of other professional sports teams, and has yet to announce their branding.

With this announcement, a third of the league's franchises have now publicly established their branding. The Los Angeles Valiant join the Shanghai Dragons, Dallas Fuel, and San Francisco Shock. With Blizzcon a little under two weeks away, it is likely there will be only one more branding announcement before the event unveils Blizzard's new spectator mode during the World Cup playoffs.

This may not be the last announcement made by the Los Angeles Valiant this week. It was mentioned in an earlier Immortals press release that an announcement of the team's full Overwatch League roster would be made during this week. It has been rumored that SoOn, numlocked, and uNKOE will be joining the preexisting Immortals lineup to form the Valiant's roster.

I'm not sure if it's possible, but if a thread already exists on something that is reported after, maybe if it has say, 10+ responses or something, perhaps they could be like "migrated" to the news post.

I mean the name was a valiant effort to say the least.

im mad at how good this pun is

Was hoping for something a bit more exciting since this is the team I will most likely be supporting. Swings and roundabouts though because it is certainly unique!