How Angry Titans ended up on the road to Paris

AFoxx left Vivi's Adventure last summer after playing with the team for over half a year. He was starting to work a full-time job and was even beginning to fade away from Overwatch when TaKeTV gave him an offer to join Angry Titans

However, the Angry Titans didn't get off to such a hot start. The team struggled for much of 2017, losing repeatedly to teams without an organization or sponsor. It was time for a rebuild, and AFoxx says he was given authority in shaping the new roster.

"When I got that offer, I got really excited because I thought this was my opportunity to make a really good team," AFoxx said. "The first thing I thought about was getting back ELLIVOTE and Lukas ( LullSiSH ) as my front line because I thought they were extremely good. If they got the power to play full time without real-life problems and could just focus on their careers, I thought they would become even better."

With another addition in ONIGOD , the team won Open Division Western Europe Season 3 2017. The roster didn't lose a single map during its playoff run.

The changes weren't over. Following their Open Division title, erki joined the team. immortal would leave the roster in January, and so he was replaced with Luddee , who had just left Mosaic eSports. The starting six was complete and the team was set to compete in 2018 Open Division Season 1 Europe.

Roster update: as you can see in the picture, we decided to bench the whole team. #StayAngry pic.twitter.com/YLuXZqjITC

The new look squad finished second in Open Division to qualify for Contenders Trials Season 1. The team then did well enough in Trials to earn a spot in the opening season of Europe's 2018 Contenders circuit. Once unable to beat unsalaried teams, the new look Angry Titans were now among the best in Europe.

Still, the Titans were unable to find a title. The team finished second in the PIT Championship Season 2 and were eliminated in the semifinals of Contenders Season 1. There was still a piece missing.

"We decided [after Contenders Season 1 that] no one splits. We got a couple of offers, but we knew how strong we were," AFoxx said. "All we needed was maybe a better coach to keep us in the right direction, so to speak. So that's when we got Packing."

The team's new coach was Packing10 , who in 2017 coached Hammers Esports and EnVision eSports. Danny was also added as an analyst to complete the team's staff along with longtime manager radioboiii . With the new staff aiding their cause, the roster was ready to grind for Season 2.

As a part of their grind, the players and the coaching staff sat down and talked with each other about what they didn't like in the previous season. AFoxx said they did this not just as teammates, but also as friends. "All together we found solutions to every problem we had and we became stronger," he said.

Angry Titans were good in Season 1, but became dominant in Season 2. The roster went 5-0 in its group and won 17 out of its 20 maps. The strong performance didn't come out of nowhere.

"Packing 100 percent had a huge influence on [us improving between Seasons 1 and 2]. We knew we were strong, we knew we had a strong team, as well, but what we were lacking was a bit of confidence and a bit of structure," AFoxx said. "And Packing gave us all of that. Packing gave us the last ingredients, so to speak, to make us very successful."

Their playoffs run has included a 3-0 against One.PoinT and a 3-1 over Winstrike Team. Now the only team standing between Angry Titans and an undefeated season is Eagle Gaming in the grand final. 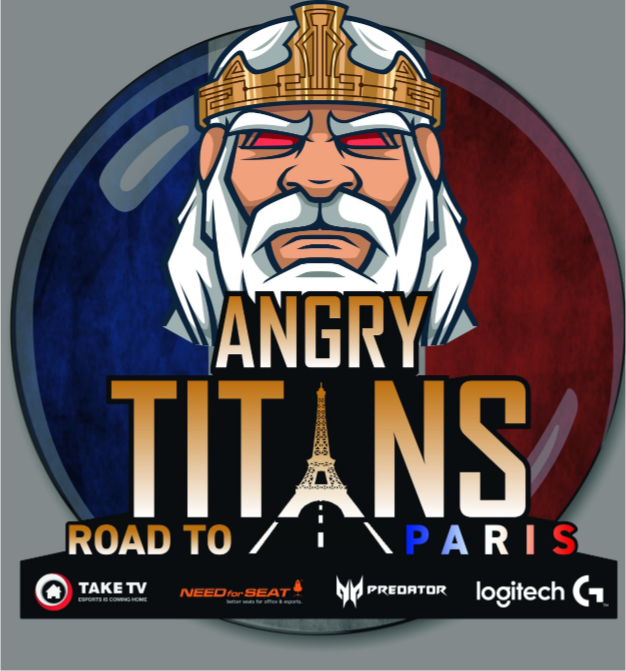 For the players on Angry Titans, the grand finals of Contenders Season 2 may be the most important match they've ever played. After all, no one wants to go undefeated in an online season only to lose at LAN.

"[Overwatch League teams] don't want to only see you [play] online because they already know you're a good player," AFoxx said. "They want to see how you perform under pressure and [in front of] a big crowd and cameras and all of that because that's basically the Overwatch League in a nutshell. So it's really important for us to not go on stage and completely choke."

AFoxx believes that his team will be fine as long as they play their game. In fact, he's entering the match with confidence.

"We know that Eagle Gaming is very famous for their tanks and everyone talks about their tanks as if we should fear them, but I think everyone forgets we were the ones who were the tank team last season. We're really confident that whatever they pull out, we have an answer for it."

That confidence shouldn't be mistaken for cockiness, however. The team is preparing for the game with the same level of effort they would any other and AFoxx says all of their egos are in check.

"[Packing tells us] we should obviously be proud of ourselves and where we've gotten, but he keeps us in line," he said. "And we as players know that it doesn't matter if we're undefeated right now, what matters is winning this final. What matters is what Eagle brings to us and what we will bring to Eagle."

A lot is on the line for the Angry Titans. The team is seeking to cement its place as the best team currently playing in Europe and will be hoping to do so with its first tournament title of 2018. On top of everything else, a good performance could be the difference in making it to the Overwatch League.

The team has high hopes for making it into the OWL. Recently, it was announced that their analyst, Danny, was signed as the analyst for the Atlanta Overwatch League team.

"Nine months ago [making it into the Overwatch League] was just a dream," AFoxx said. "Right now, it's a possibility."