A record-breaking season that shocked no one

They started their first season in the Overwatch League 6-14. Then, at around midseason, two of their players became old enough to play. Then they added a relatively unknown American support player and two stars from Contenders Korea. In the second half of the season, their record was 11-9.

That was just the beginning for the San Francisco Shock. “We really planned for this year. This was our year,” Shock owner Andy Miller said before the 2019 Grand Finals. “Last year, we were putting it all together. We based our team around two kids--and I’ll say kids because they weren’t old enough to play until halfway through the season.”

Those two kids he was referring to are sinatraa and super . Neither one was 18 when they were first signed by the Shock, and thus both were ineligible to compete immediately. That means that the Shock had to play without two of their biggest initial signings until March of their first season.

“So we waited and we waited until they came out and we built from there.” They added main support Moth and DPS player Architect just before sinatraa’s 18th birthday. A few weeks later, the Shock brought in Architect’s former teammate from X6-Gaming, ChoiHyoBin , to the team.

Those five players became the core of the Shock’s 2019 roster. Over the course of the offseason and the first half of the 2019 season, the Shock dropped everyone from their 2018 roster except for those players and off-tank player Nevix .

Around the same time that core was built, the Shock released Sephy, their former head coach, and hired Crusty as their new head coach. By that point, Crusty had already built himself a solid reputation, especially after his Boston Uprising squad went 10-0 in Stage 3.

Several more players were added to the Shock over the offseason. They began their offseason by trading for main tank player smurf . They brought up Rascal from their academy team, NRG Esports. Flex support player Viol2t was added later in the offseason. They added their final piece when they traded for Striker a month before the season started.

The Shock were already a threatening team on the rise before making those offseason moves. However, the team continued to add more pieces and get better. Perhaps it was just the start of the franchise applying Crusty’s philosophy, which Andy Miller said was “if you’re not getting better, you’re getting worse.” 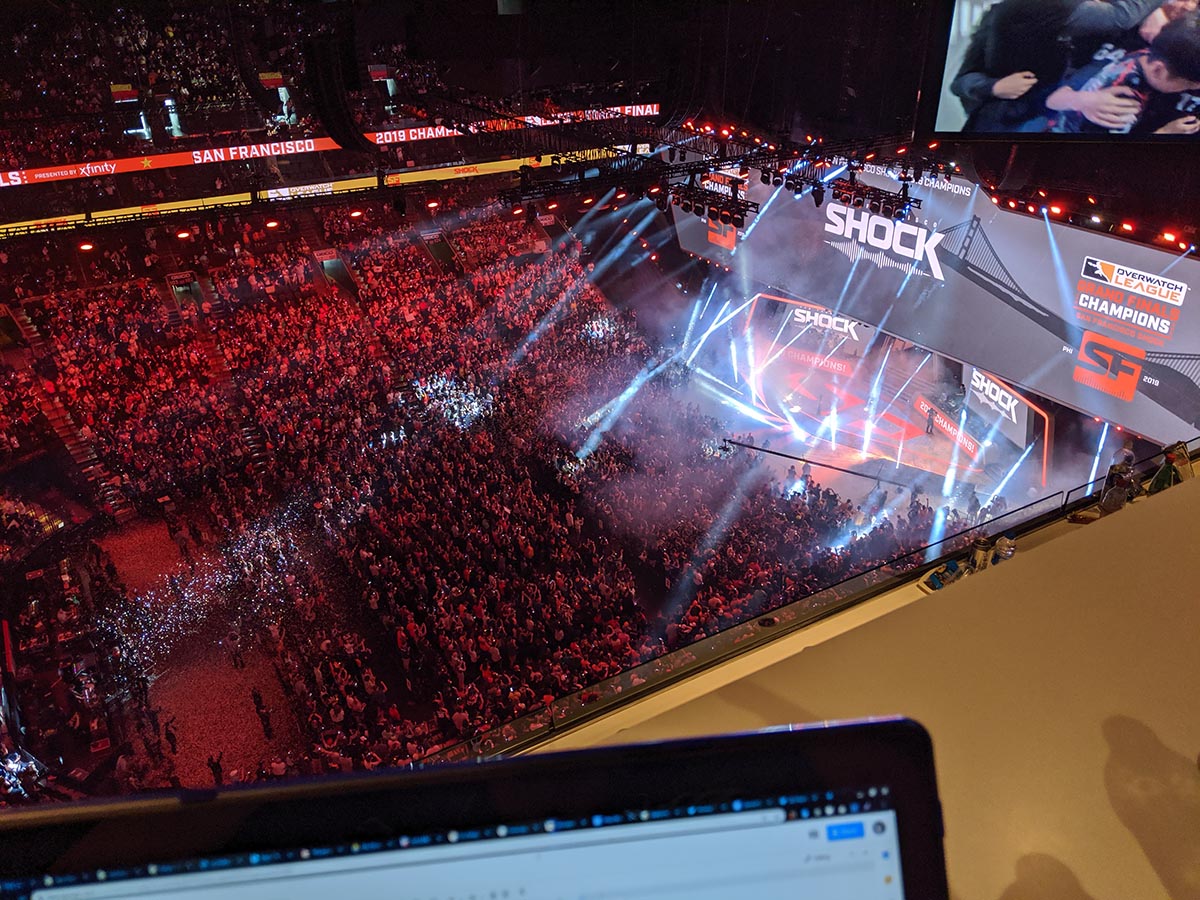 Nonetheless, the roster’s improvement wasn’t immediately apparent, at least going by record. That was in large part to a killer Stage 1 schedule that saw the Shock play against both of the teams that went undefeated that stage, the Titans and the Excelsior. An opening week loss to the Gladiators, as well, put the Shock at 4-3 at the end of Stage 1.

But that was still enough to qualify for the Stage 1 playoffs, and the Shock made it count. Two consecutive sweeps landed them in the Stage 1 finals, putting them up against the Titans for the second time in the season already.

That match became an instant classic. The series was an insanely close 4-3 bout in which the Titans narrowly won after trailing 3-2. The Shock soon forgot how to lose.

They went undefeated in Stage 2’s regular season--not just in matches, but in maps, as well. Their 28-0 run through the stage was the Overwatch League’s first ever golden stage. They continued that momentum through the stage playoffs, winning their stage finals rematch over the Titans 4-2.

“They were just waiting for our team to fall apart and they never did,” Miller said.

Some teams may have thought they were seeing the moment the Shock would fall apart in Stage 3. They lost to a Houston Outlaws squad who just came off a winless stage to start Stage 3 and lost again to the Chengdu Hunters later in the stage. The meta was evolving--Sombra was being used in the place of D.Va within the traditional GOATs composition--and it looked like the Shock were failing to adapt.

But then they did.

The Shock made it to the Stage 3 finals to face off against the surging Shanghai Dragons, making the Shock the only team to compete in all three of 2019’s stage finals. The Dragons went up 3-0 in that match, but the Shock responded by winning the next three matches in turn. They were unable to convert their comeback into a win, but they had made a statement. The Shock were just as strong as they had always been. 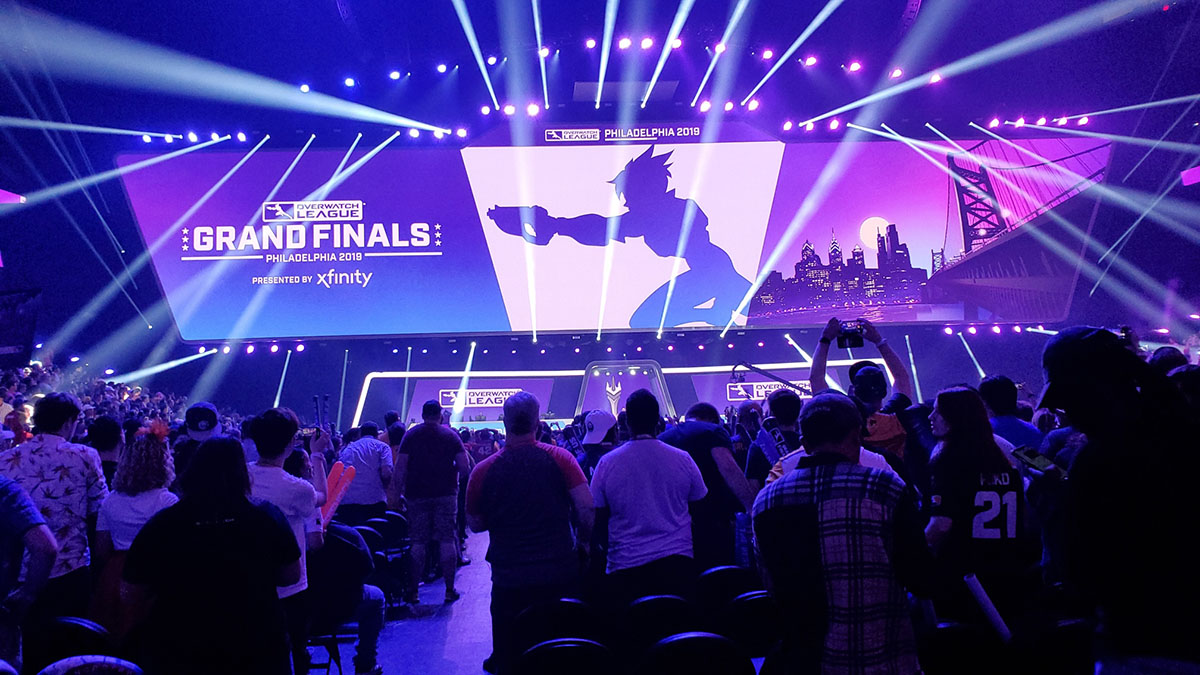 Then, between Stage 3 and Stage 4, the Overwatch League instituted a 2-2-2 role lock. This move killed GOATs, a composition that utilized three supports and three tanks. However, the Shock were built for such a moment.

For the first three stages, the Shock rarely deviated from the six players on their starting lineup. In nearly every map, the team played sinatraa and Rascal at DPS, ChoiHyoBin and super at tank, and Viol2t and Moth at support. But the Shock had plenty of talent on their bench, and Stage 4 became their first opportunity to show it.

During Stage 4, the Shock used Architect in place of sinatraa and played Smurf over super. Even with the change in meta and change in starters, the Shock looked just as good as always. They went undefeated in a stage for the second time in 2019, defeating three playoff teams--including the Titans--en route to a 7-0 Stage 4.

The Shock had to play Stage 4’s only other 7-0 team, the Atlanta Reign, in their first match of the playoffs. They lost to the Reign 4-3 after stepping off the payload at the end of Rialto in a teamfight they were winning. The defeat was heartbreaking; but just like their previous close defeat in the Stage 1 finals, the Shock soon forgot how to lose.

“I definitely think [losing to the Reign] made us work harder immediately after that match, so that ended up paying off” Moth said. “Because we worked hard, we worked a lot more to better our understanding of the meta and refine our teamwork as much as we could.”

Only a day later, it appeared as if the Shock had mastered the meta and their teamwork had been completely refined. The Shock trounced the London Spitfire 4-0 in their next match. But that match wasn’t notable for the margin of victory alone.

Following the 2019 season’s title game, sinatraa said, “I think everyone [on the Shock] was just the best at their role. Literally.” With DPS finally getting a chance to play DPS, the Shock were able to prove it. And between Stage 4 and the playoffs, they could extend that honor beyond the six players who played in the first three stages.

Striker came off the bench for the playoffs, becoming the team’s primary Reaper player. Nevix, although not playing often, came in to play during that match with the Spitfire. In fact, everyone did. The Shock became the first team in Overwatch League history to play every player on their roster during a playoff match.

The players were ready for such a moment.

“[Crusty] made everyone know that they still had value on the team, even if they weren’t playing at that moment,” super said. “And I think everyone took that to heart and it showed.”

Very true@NevixOW's play was rly insane
I learn from him a lots
I almost guarantee that no one can beat nevix's mechanic https://t.co/anblWXfZaR

And what he said showed. The Shock were just as dominant in their final map, Watchpoint: Gibraltar, as they had been on their previous three maps. The four players who entered the match for the first time outplayed the Spitfire’s starting lineup just as the players on the Shock’s starting six had. The Shock were out to prove they were good from top to bottom.

“I think we have the 10 best players in the league,” super said.

And the Shock proved it as their playoff run continued. Whether they played six players, eight players or 10 players, the Shock swept every opponent they faced. Three more sweeps after their Spitfire win landed the Shock in Philadelphia playing against the Titans for the fifth time this season.

Many expected the title match to be close. After all, as hot as the Shock were, the Titans had only lost five matches out of the 36 they played all year. The Titans and Shock were 2-2 with each other on the season and not once in those four matches did one team sweep another. However, the Shock may have been one of the few teams expecting the result that actually happened.

It wasn’t the analysts who got the match result right, it was sinatraa. The Shock were truly unbeatable in their championship match with the Titans. Even when the Shock appeared to be on the cusp of losing Eichenwalde, they crawled back into the fray with some overtime heroics from ChoiHyoBin and his teammates and won the map. The Shock weren’t satisfied with winning. They wanted to dominate.

Still, sinatraa conceded that the Titans put up a fight and the maps were close. But the Shock had become so dominant that making individual maps close was the best any team could do. The Shock’s 20 map win streak in the playoffs (which is still technically ongoing) is second only to their 28 map win streak earlier in the season. To put into perspective the difficulty of what the Shock did, the Titans never won more than 13 maps consecutively this season. Not only did the Shock best that twice, one of the times they more than doubled that streak and the other time they did it in the postseason playoffs playing against the best teams in the league.

So sinatraa can be forgiven for having such high confidence. It’s not like he’s the only one on the team either. All of the players on the team talked about their roster being the best in the league and Crusty stated that the Shock had the best coach in the world (he clarified this includes junkbuck and NineK when his team laughed at the comment).

That doesn’t mean the Shock will rest on their laurels and expect success to keep coming their way. As stated before, Crusty’s philosophy is “if you’re not getting better, you’re getting worse.” The team appears to be taking it to heart, and are already looking to prepare for next season.

“I think we’re all kind of feeling happy--we’re going to celebrate--and then when season three comes around, it’s grind time again,” super said. “And we’ll just do what we did this year.”

And while super and his teammates were reflective of what it was like the win the Overwatch League’s title and hold the trophy, “For me personally, all of our hard work got to this one moment… It felt like a culmination of all of our work this season,” it wouldn’t be the Shock--or super--without making jokes first.

“I mean [the trophy] was heavy for one, it was a little heavy.”