The day was a long one, built for fans. However, the match was short. In just four clean maps the San Francisco Shock

The day started with FanFest, which gave Overwatch League Grand Finals 2019 attendees the opportunity to push a Bud Light truck like a payload, blink across foam blocks like Tracer and collect merch from several different stands and sponsors all under the warm Philadelphia sun.

While fans found more attractions and things to do inside the Wells Fargo Arena, those weren’t the main draw. No, the draw for today was a gargantuan matchup of two juggernauts in the 2019 Overwatch League season’s championship. The Shock and the Titans were going to play for the championship and the season series.

Zedd warmed up the crowd with a pre-match concert and then the stage belonged to the players. While both teams took the stage at once, only one team would be left on the stage at the end of the day.

“For me personally, when I was walking out my whole body was numb because I was so nervous,” sinatraa said after the match. “But after sitting down I just took a lot of deep breaths--don’t know if the camera showed but yeah--tried to calm myself down and treat it like a normal match and I kind of did that well.” Moth said the moment he sat down it was like he playing at the Blizzard Arena. From the moment the first map started it appeared as if the Shock had never been nervous at all.

The Shock came surging out the gate with their lineup, winning Lijiang Tower on a 2-0 scoreline. While the first round of the map was a relatively easy roll for them, their second round was much more difficult. Still, they triumphed over a strong Titans team to take the early series lead.

Following a quick DPS swap that put Rascal and Architect into the game, it appeared as if the Shock were destined to steamroll the Titans on Eichenwalde when they finished their attack without losing a teamfight. However, the Titans responded by nearly mirroring the Shock and finishing their attack with only a couple seconds less on their time bank.

Despite being unable to capture a second tick of the first point on their second attack, the Titans looked poised to win Eichenwalde thanks to a strong defense. Alas, the Shock broke through in overtime to capture the point and take a 2-0 lead going into the first break.

Big Death Blossoms from SeoMinSoo seemed incapable of doing enough to overcome the Shock. While his work was enough to win singular team fights, it wasn’t enough to convert those team fights into map victories.

After the break, the Shock returned their starting DPS into the lineup and the Titans faced a must-win third map on Temple of Anubis. The Titans came out strong and seemed to be ready to turn around the series, but found themselves slowed down and once again at a time bank disadvantage after both teams attacked. Heroics from Haksal and SeoMinSoo were not enough for the Titans as the Shock sealed the map. The Titans found themselves down 3-0 and facing elimination for the remainder of the series.

The Shock continued their pattern of swapping both DPS between every map and brought out Rascal and Architect again. The pair continued to show off their strength on Mei and Bastion and finished their attack with extra left in the time bank. The Titans needed a good attack to keep their championship hopes alive.

They put up a valiant fight, but it wasn’t enough. Before long they were on the third and final point face-to-face with Architect’s Bastion boosted by an Amplification Matrix as the time ticked off the clock. He mowed down the Titans and sealed his team’s championship.

And that's the game! @SFShock are you #OWL2019 champions! pic.twitter.com/iF51nhpQyO

Titans head coach paJion stated after the match that the Titans expected the Shock to swap their DPS and even correctly predicted much of their hero choices. He took the blame for the team’s loss and said that he was unable to prepare them too well against the Shock’s swaps despite expecting it.

While the rotation between DPS players kept the Titans on their toes throughout the match and the heroes the Shock used were constantly in flux, one thing was common throughout the match: ChoiHyoBin’s Sigma remained an oppressive force that the Titans struggled to overcome from the first map to the last map. He was awarded the Grand Finals MVP.

ChoiHyoBin said before the grand finals that he was unsure if he was the best Sigma in the league. While his tune changed after he won the match and the MVP trophy, it didn't change by much.

"I'm going to keep the humble approach, which I think I'm the best but my teammates put me in the position for it."

His teammates didn't shy away from praising him, however. Immediately after ChoiHyoBin gave that answer, one of his teammates quickly interjected, "Choi is the best." 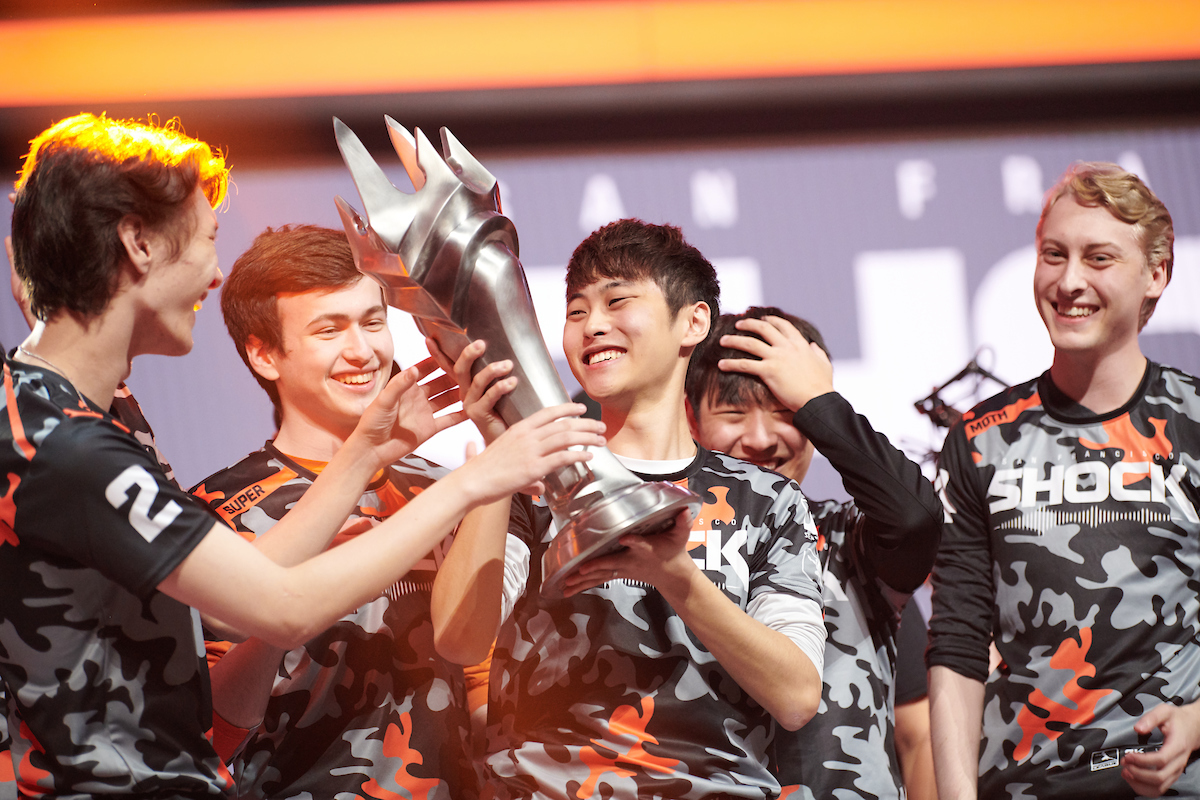 He wasn’t the only one confident in the Shock’s strength during the playoffs.

“When we lost [our first playoff match against the Atlanta Reign], I actually got texts from probably half the owners in the league--I didn’t tell you guys--but they said, ‘I think you’re going to win the whole thing now,’” Miller said. Both Miller and the players cited their loss in that match as an opportunity for the Shock to get more preparation and work harder, leading to their eventual championship.

The Titans, however, were likely one team that did not expect the Shock to win the title. After clinching the number one seed and making it into the grand finals through the winner’s bracket, they had no reason to expect anything less than a title. “I didn’t expect to lose 4-0,” Twilight said after the match. “I feel like we lost too easily, so I’m a little bit angry.”

Still, the Titans wanted to own their loss. “As the point of view of the team that lost, I feel like everything I say right now might be a kind of excuse,” paJion said when asked if the break between matches killed his team’s momentum.

Regardless of why they lost, the Titans are a good team. They were swept only once in the entirety of the season prior to their grand finals defeat and secured the league’s top seed with several weeks still left to play.

The Shock didn’t just win the league’s championship. They won it by sweeping their toughest competition in the finals and left no doubts as to who the best team in the league is.

Miller talked about how the Shock were built to be good this year rather than last throughout the weekend. That championship trophy should serve as validation for such a vision. Still, maybe even he couldn’t believe just how well it worked.

“It’s unusual in life when a plan really comes together.”

they still put up a fair fight

This is true, Twilight with the sleeps, JJanu was alright as well.

OWL is an anime