The roster of GRUNTo Esports 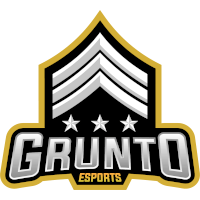 We have parted ways with GRUNTo Esports, and will be competing in Contenders playoffs under a new name. We thank GRUNTo for everything. Updates coming soon.

The roster was only with GRUNTo Esports for about a month and a half before leaving the organization. Their time together lasted for the entire Contenders Season 2 regular season.

"We wanted to do our own thing," said team social media manager Bam when asked about their reason for leaving the organization. "We have a vision for the way we want things to run and operate, and we believe that going on our own was the best way of doing that."

Despite their sudden breakup, the team had nothing but good things to say about the organization. "GRUNTo is a great organization with a great story. We have nothing but praise for them, and wish them the best of luck with their future endeavors," Bam said.

Their desire to operate on their own doesn't mean they won't consider joining an organization again in the future. "We are always willing to listen to organizations and offers, we’d be foolish not to," he added.

The team finished second in the regular season of Contenders North America East after finishing with a 6-1 record. They are guaranteed a bye in the first round and thus won't play until the semifinals.