Next weekend's schedule, tweaks to hero pools and divisions revealed on Watchpoint

The Overwatch League has announced changes to hero pools. They have also revealed changes to the divisions in response to the league's move to online matches and announced the schedule for the first weekend of such matches, all in an episode of Watchpoint.

We covered A LOT of info on Watch Point today 🔎

Additionally the schedule for this weekend's online matches, the first official Overwatch League matches to ever be played online, has been revealed. The Shock, Dynasty, Gladiators and Valiant will play in the matches. 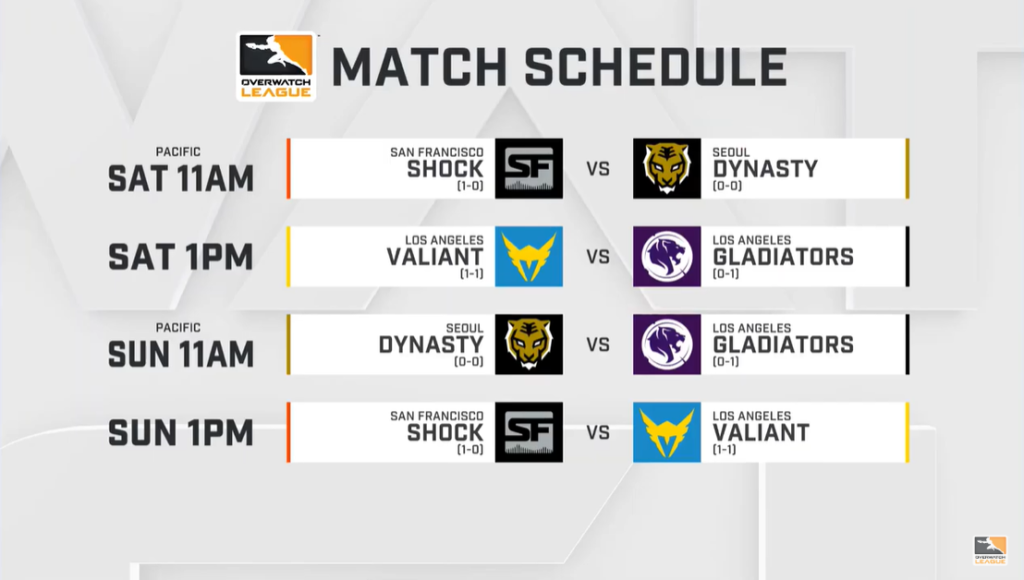 The Overwatch League teams will now play in three divisions based on servers to minimize latency in online play as much as possible. All 10 teams currently in the Atlantic Division will play each other on an American east coast server because all teams are currently based there. Six of the Pacific Division teams -- the five on the American west coast plus the Seoul Dynasty -- will play together on a server based on the American west coast. The four Chinese teams will play each other on a server in China.

The Seoul Dynasty are currently in the United States, Dynasty General Manager Hocury told over.gg writer Mark "Snivy" Koosau in an email. This was likely a factor in the Dynasty ending up on the division with the west coast teams.

As revealed previously, Spector said All-Star festivities will now occur at the end of the season instead of the the middle of the season and the midseason tournament has been cancelled.

The rest of the schedule for the online matches have yet to be announced. All of the matches will be broadcasted. Spector said the goal is to finish the online make-up in March and April and the league will begin playing matches on Fridays to help accomplish this.

Currently, there are no plans to extend the season beyond when it was originally scheduled to end. However, Spector said the Overwatch League is open to doing so if needed.

Well after watching the Watchpoint update video, it was confirmed that the Chinese teams are working on getting themselves matches at a later date as the VP of OWL does want to have homestands return again they were successful as much as news is confirmed so hopefully whoever is doing the smarts with corona later in the year. The VP or OWL did also state that the 28 matches will go throughout the end of april, great!

I am a bit sadden but as the CEO of OWL said, they couldn't find another way for the mid-season; I personally would've liked to see the team standings by that point. I didn't realize soul got back to NA so good on them but I would like to see the other Chinese matches since I always liked Chengdu versus Titans last year.